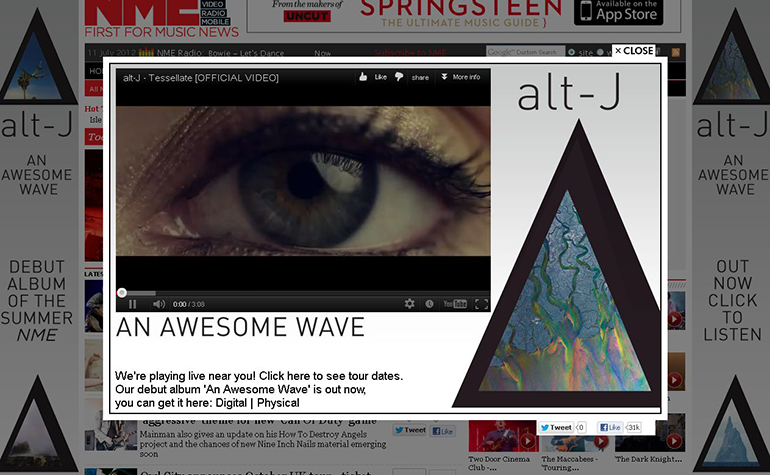 Alt-J released their debut album ‘An Awesome Wave’ (Infectious Music) 28-May. Already a hotly tipped new band our task was to support the release of the record reaching audiences and maximise album sales, however we needed keep the relatively unknown persona of the band a mystery allowing audiences to discover Alt-J and their music first hand.

OUR APPROACH… We adopted the strategy of allowing the current buzz around Alt-J to grow organically rather than force sales messages upon audiences.

We felt Online would achieve our goal and early support for the band had been significant across lifestyle/music sites such as Dazed, Vice & 1883. Along with buying activity across these sites we also displayed adverts across the early adapter music sites/blogs. To ensure we made a unique impact on these sites with something different we used the ‘triangle’ image from album cover as our sole image with limited information on the release, the concept was for users of these specialist sites to discover the band. We knew the users of these sites would click on the adverts as they are investigative.

As we didn’t advertise in Print apart from one advert in Clash Magazine but we knew we could still reach these readers + a wider audience via Outdoor advertising. We run a 6-sheet poster campaign ensure we delivered the right ad placement to reach the desired audience. The band announced numerous festival dates, we booked posters in/around the stages at these summer festivals (image to follow).

Social networks had always been effective for the band. We created a 30” pre-roll advert which was ran across YouTube & VEVO along with companion banners targeting our activity via refined keywords optimising as the campaign progressed.

NME was a key title for reaching our audience. Rather than running an obvious print advert we chose a run a NME.com Site Takeoverlay, this is a site reskin which enlarged to a video takeover (see images) only when a user engaged with the reskin. The USP of a Site Takeover is the cost-per-engagement pricing model which guarantees a certain quantity of user engagements, these engagements ensured we knew NME users were discovery Alt-J & their music first hand.

Result: Alt-J ‘ An Awesome Wave’ spent 20 weeks in the charts with their highest chart position #19, all achieved on a limited budget.