The Cribs – In the Belly of the Brazen Bull 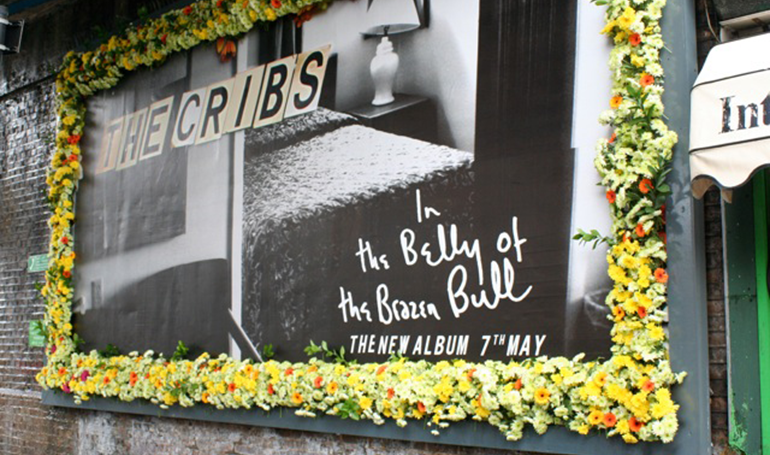 The Cribs released their 5th studio album ‘In the Belly of the Brazen Bull’ 7th May 2012 (Wichita Recordings).  Having already established themselves as one of the UK biggest cult indie bands the challenge was to ensure we delivered and executed a media plan which engaged with existing fans but also introduced The Cribs to new audiences.

The obvious approach…  We could have easily booked the outside back covers of the music press + run online takeovers of various websites + supported with a poster campaign.  This however, with the current declining ABC print circulations  would not have been inventive, cost effective or deliver tangible results but instead ‘vanity’ marketing.

OUR APPROACH…  We wanted to current a viral buzz around the release on the record and with The Cribs and their fans being very active across the Social Networks we knew we could go direct fan-to-fan with the right idea.

Viral activity can be achieved if you create something ‘unique’.  Playing upon the album’s artwork we set up a billboard in Shepherds Bush re-creating the artwork with real flowers.  Fans were invited via Facebook help be a part of the ‘special build’ by coming along to Shepard Bush and placing a flower into position.  The special poster build took place Sunday morning pre-release and the event was filmed:

We took this video content and placed it on The Cribs Facebook page.  This was also supported by a commercial Sponsored Stories to promote the Facebook page creating as many connections to their Facebook page as possible.  The video format was created in a Promoted Video linking direct to iTunes plus Twitter feeds promoted the poster build with images.  Throughout all our action we had a call to action promoted the release.

The response was pretty spontaneous and once we had created the initial buzz the viral feeds took over and the message was spread across the Social Networks.  Along with social networks creating their own buzz the Reach of our work also extended to Radio coverage with Eoghan McDermott across his XFM Drive Time show informing listeners that they “Need to see the amazing Cribs poster in Shepherd Bush”.

Additionally to supported the campaign with pre-roll content across YouTube, VEVO & TV on-demand service Channel4OD.  We also run more traditional media formats with a full page advert in NME week of release as well as the Metro Yorkshire and front page of the bands local paper Wakefield Express to coincide with a homecoming gig.

Result:  Belly of the Brazen Bull reached #9 in the charts. Activity started pre-release and continued throughout the summer as the band featured on a number of festival bills as well as their own UK tour.